Front View Feeds is excited to begin a blog on our website featuring articles about poultry feeding, nutrition, genetics, and general management to help you be successful with your flock. It is our goal to bring you the latest scientific research and data and help you to apply it to your flock so that you can be more successful. Whether you just own a few laying hens or are a serious breeder and no matter your experience level, we hope you can learn something from us.

To begin our blog, I would like to take time to discuss the role of protein in poultry diets. Having grown up in the exhibition poultry world and in discussions with other poultry breeders the most discussed nutrient is usually protein.

But what is protein? Why do people pay so much attention to it? 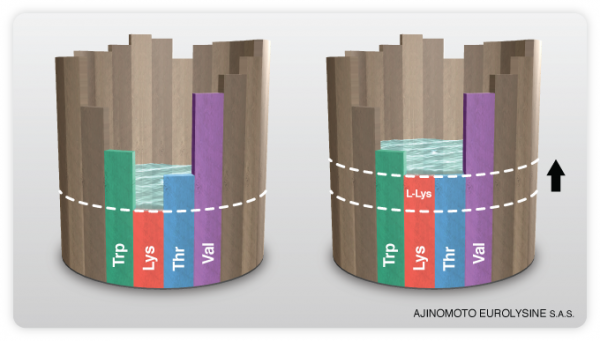 A good way to visualize this concept of amino acid balancing is by thinking of the staves of a barrel, with each stave as one amino acid and the whole barrel as the protein. Water will only be able to fill up to the shortest stave, or the amino acid that is lacking the most, limiting the amount of water in the barrel, regardless of how high the other staves are.

So which amino acids are important?

How do we account for this and ensure our diets contain these amino acids?

Historically, before amino acids had been studied much, nutritionists added high amounts of protein and protein from several ingredients since this is what gave better results. Now that we know much more about the importance of amino acids and can readily identify them in our feed ingredients, we can safely use less crude protein without negatively impacting bird performance.

Therefore to ensure that Front View diets contain enough amino acids we first analyze our ingredients. Most every ingredient we use contains these amino acids to some degree. By doing a regular analysis of our ingredients we know what we are feeding and these amino acids values are considered while formulating our diets. Ingredients such as soybean meal, pork meat and bone meal, and corn distiller’s dried grain with solubles (DDGS) are all high in amino acids. However, these alone usually aren’t enough to reach the amino acid requirement so we utilize synthetic methionine, lysine, and threonine. These synthetic amino acids are highly digestible and can be included at a very low rate to achieve our goal.

Now, this does not mean that crude protein values are not important at all, or that the first three limiting amino acids are the only important ones. Crude protein still needs be present, because of those seven other essential amino acids that we did not mention. But by formulating to amino acid requirements, rather than just crude protein, we can reduce the amount of crude protein in our diets. Which can have several benefits including:

So to conclude our first blog post, yes protein is important for growth and tissue repair and adequate levels are needed for optimum performance. However, protein really isn’t as important as knowing the amino acid levels of a given diet. It is these amino acids that determine the potential for growth and performance. And due to this fact, we can safely lower crude protein levels which has many benefits for you and your flock. These are many of the reasons why a lot of Front View diets are relatively low in crude protein, especially diets for mature birds. This is also why many diets have the same or similar crude protein levels across different species. The amino acid requirements are different for each species and that is one of the reasons why we offer so many feed options.

We hope you learned something here and stay tuned for more information!